Posted at 15:48h in Nieuws by Elvira Beetstra
0 Likes

In my previous message I mentioned that we saw the ‘solution’ in the east. The next weather report said that east certainly wasn’t the answer… So, we headed south and travelled down the Scottish and English coast. We dropped anchor at Gardentown for a while, so we didn’t have to fight against strong southerly winds.

Finally, around Middlesbrough we reefed the rig and started the crossing. With the wind slightly more backward than straight in, we sailed in one go to the Dutch Wadden Islands. There the water was a lot flatter and people could move around the ship again.

We were a bit nervous whether we would be late because we had to run at an average speed of 6 knots. That’s quite a lot. But once underway, it soon became clear that speed was not going to be the problem. Especially just above the islands, we ran very fast on the flat water. Now we were a bit early again. But losing time is never so difficult. We took some rest at anchor at Spiekeroog. Now the ship is slowly waking up and after breakfast we will sail the last miles to Bremerhaven. 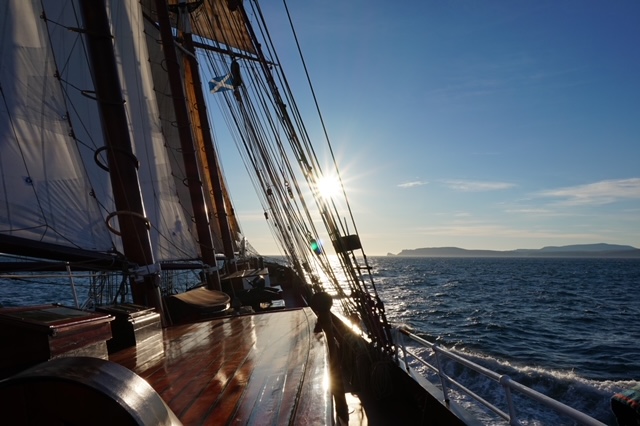