Posted at 21:32h in Nieuws by Elvira Beetstra
0 Likes

Today we are hiding in Dunkirk. A small deep depression with southwest winds up to 34 knots are not really something to go against.

After we had a wonderful day trip in Scheveningen on Saturday, the guests came on board that same evening for the trip to Boulogne. We left Sunday morning after breakfast with a ZW 2-3. Not much wind but wonderful for the new guest crew to get to know the ship. When we were again in front of Scheveningen after four tacks and the wind decreased even further, we started the engine. By 05:00 hours we have dropped anchor near Vlissingen. After breakfast a high-speed Yacht Support ship arrived and sailed so close that we even saw who was waving, it was Captain Maarten!

When we hoisted the anchor and sails a rib approached us at high speed, and they asked if they could come on board with a few men. It was customs. According to their records, we were not cleared after our journey from Aberdeen back to Rotterdam. A misunderstanding which was cleared up after an email from Elvira from the office. After everyone showd their passport they were on their way again.

Without wind and therefore on engine we arrived in Dunkirk at 22:00. The photo was taken by an enthusiastic amateur photographer upon entering Dunkirk and was found on Instagram. 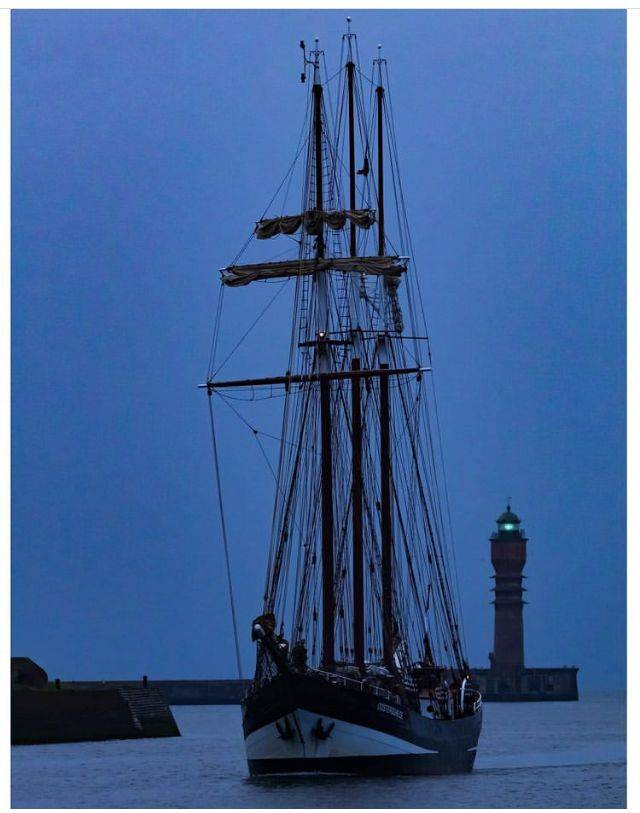