Via the Shiant Isles and Stornoway to Ullapool

26 May Via the Shiant Isles and Stornoway to Ullapool

Posted at 21:32h in Nieuws by Elvira Beetstra
0 Likes

Here we are, Ullapool. The end of the first voyage after a long lay-up. And what treat! On the way from Portree we made a stop at the Shiant Isles. Two oversized rocks in the middle of the Minche where puffins (hundreds or thousands, countless) nest and a pair of sea eagles made their home. There was also a woman who had rented the only house on the island, and she was apparently very happy to have a chat with our guest crew. They gave her a bottle of wine.

Then on to Stornoway, we visited the stone circles and the village with the Blackhouses. The last day of sailing, the 25th of May, was the icing on the cake: under full sail sailing into Loch Broom with 6.5 knots. Manoeuvring between the islands in the loch is magnificent! Unfortunately, the dark cloud over Ullapool spoiled our planned spectacular entrance into the harbour. Just to be sure we took all the sails away as we expected a lot of wind. In the end it was not that bad, but you never know…

Now we start the cleaning! 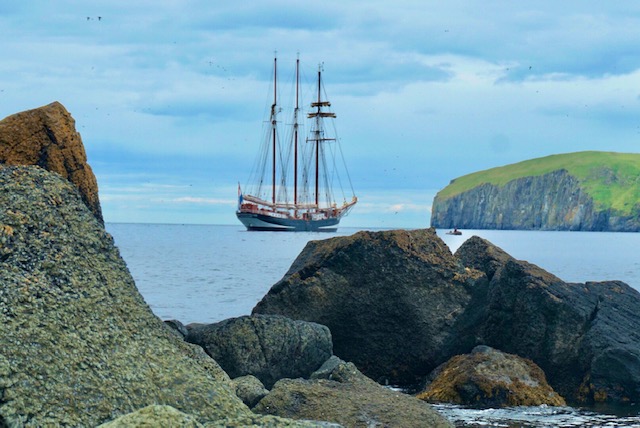